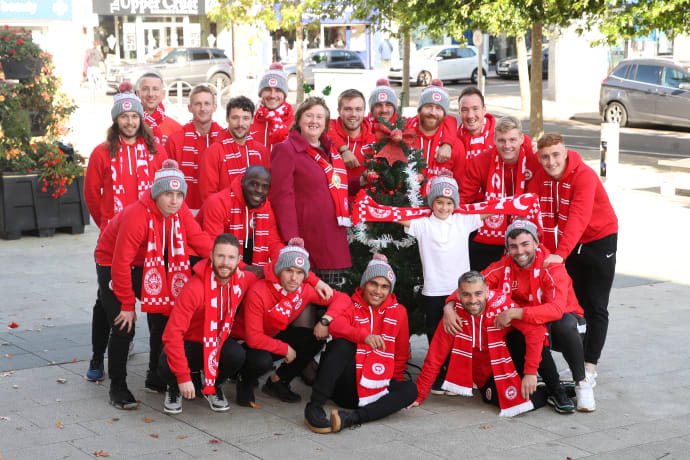 Larne Football Club will be helping Santa switch on the Christmas tree lights in the town on Friday evening.

The Larne Football Club first team will lead a special lantern parade with Santa and Alderman Greg McKeen from Larne Market Yard to Broadway to switch on the lights at 7.30pm.

Chair of Borough Growth, Councillor Gregg McKeen said: “I am delighted that Larne Football Club will join me to switch on the Larne Christmas lights this year.

“The club has been going from strength to strength with fans uniting behind the team as it continues to make headlines and capture the imagination. We will be joined by another great man in red, Santa who has made a special trip to kick of the festive season.”

Club Chairman Gareth Clements commented: “Having taken part in the parade last year it was great to be asked back. The smiles, warmth and feel good factor was rich, there was a real buzz of anticipation for the players from the crowd, and this is something we were all humbled by. Putting smiles on faces and trying to spread positivity through the community are two of our key drivers. The lights switch on, is our way of giving a little back to those who support us week in, week out during the season.”

Spot Mrs Claus and some Victorian carol singers will also spread festive cheer on the streets of Larne. Be sure not to run afoul of our Elf & Safety team and look up to see if you can spot Gladys the angel.

Make sure you check out the wonderful window displays of our local traders who have been competing in the Larne Christmas Window Competition. The winner will be announced from the main stage on the evening of the event.

The parade will start at approx. 7.10pm from Larne Market Yard, heading along Circular Road, Quay Street, stopping briefly at Broadway for the Light Switch On at 7.30pm and returning along Main Street and High Street.

Entertainment will continue at the 1889 Sports & Social Club at Larne Football Club with special music by Paul Sexton.